Back to overview
1,132 what's this?
Login
No translations available.Add translation

I've started doing something recently that's been really rewarding. I'm the maintainer of angular-formly a fairly popular library for forms with AngularJS. I've committed a lot of code and the library has 33 contributors right now. For at least five of these contributors, it was their first time contributing to an open source library.

I've tried really hard to make it easy to contribute to angular-formly. I've done all of the common things an open source project maintainer does and some less common things...

I've even recorded screencasts to demonstrate how to get things setup. But what I didn't realize was that there was still something missing...

A few months back, angular-formly got a pull request from Koen Weyn who wanted to fix some IE8 compatibility issues with the project. He submitted a good PR (pull request), we iterated on it a little bit, and it got merged. He mentioned to me that it was his first ever GitHub pull request. That was a neat experience. It was cool to be a part of someone's first ever open source code contribution.

It wasn't until a few months later that I had an idea. While developing a new feature doing TDD (Test Driven Development) all the way (and loving it), I finished the tests and was about ready to start on the implementation. Then I had a thought: “Why don't I let someone else work on this? I know exactly what I'd do. I could do some hand-holding and help someone contribute to open source for the first time.”

Small tangent… I'm a happy father of two. When teaching or playing with my kids, sometimes I have to ask my daughter to give her brother a chance to answer a question. Many people are eager to please and help out. So when I throw out a soft-ball to my son, if I don't ask my daughter to let her little brother answer, she'll spout out the answer and he'll have a harder time learning/feeling the satisfaction of answering. I think that sometimes we adults can behave the same way.

So I decided to commit the tests, but skipped (so the build wouldn't fail) (using describe.skip from Mocha), then I pushed them up and added this comment to the issue:

Make it as is easy as possible. Say exactly where the code needs to go and recommend a good approach.

The hard part of getting into open source for the first time isn't the implementation of a feature, but figuring out how to actually contribute code.

So I explain exactly what to do in the issue, and then I blasted it out on Twitter, Gitter, and Slack:

I will only accept a PR for this one from someone who has never contributed to open source before. Instructions: 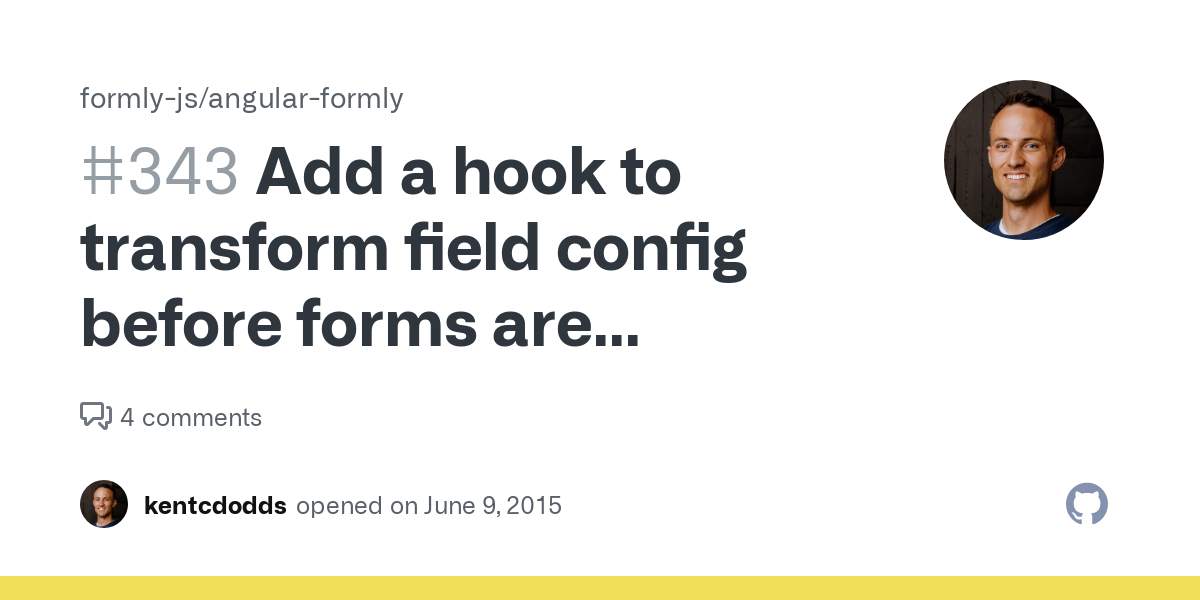 Add a hook to transform field config before forms are compiled · Issue #343 · formly-js/angular-formly
Would be handy if formly-form invoked an overridable function in formlyConfig that allowed transforming the field's (adding/removing/modifying) before they're passed to the formly-field dir...
github.com
1:41 PM (UTC) · June 12th, 2015
6 19 59

It wasn't long before I had several people reach out to me on all three mediums asking if they could take a swing at it. Finally with this PR, Stephen Bluck took his first step into the open source community.

It felt awesome! So I looked for opportunities to do this some more. I've had the chance to do this three more times and it's been rewarding for both me and the contributor each time. The project now has a first-timers-only label for this purpose. Shoutouts go to Douglas Mason, Devan Beitel, and Brian Macheski for taking up the challenge. For those of you who haven't had a chance yet, don't worry, there's definitely more to come…

Now, could I have finished it quicker and moved on my way if I'd just done it myself? Of course. But that's not what it's all about as an open source contributor. It's fun delivering good software that helps other people, but also realize that there are tons of people out there who just don't know where to get started.

Some of you may be asking yourself, “what if I (and other lib users) don't want to wait days for the feature?” From my experience, people are eager to try it out. At least one PR (sometimes several) is submitted, iterated on, and merged within a matter of a few hours.

I've thought back on my first pull request. It was nothing spectacular. It was really small. I learned how to use git and GitHub. It gave me an opportunity to figure out what contributing feels like. That's a rewarding feeling. As open source project maintainers, we are empowered with the ability to help newcomers feel this for the first time and contribute back. Let's do it!

If you are an open source project maintainer, give this a shot. Add the label first-timers-only to your project so people can find it here. You might also consider referencing makeapullrequest.com. I think that we can be more friendly to newcomers in the open source community. You never know, you may find a new main contributor to the project or even a new life-long friend. Either way, the more people we get into open source the better. And by being open like this, we're helping “Bring Kindness back to Open Source.”

See you on the githubs and twitters!

1,132 what's this?
Login
Tweet this article
Discuss on Twitter•Edit on GitHub
Written by Kent C. Dodds