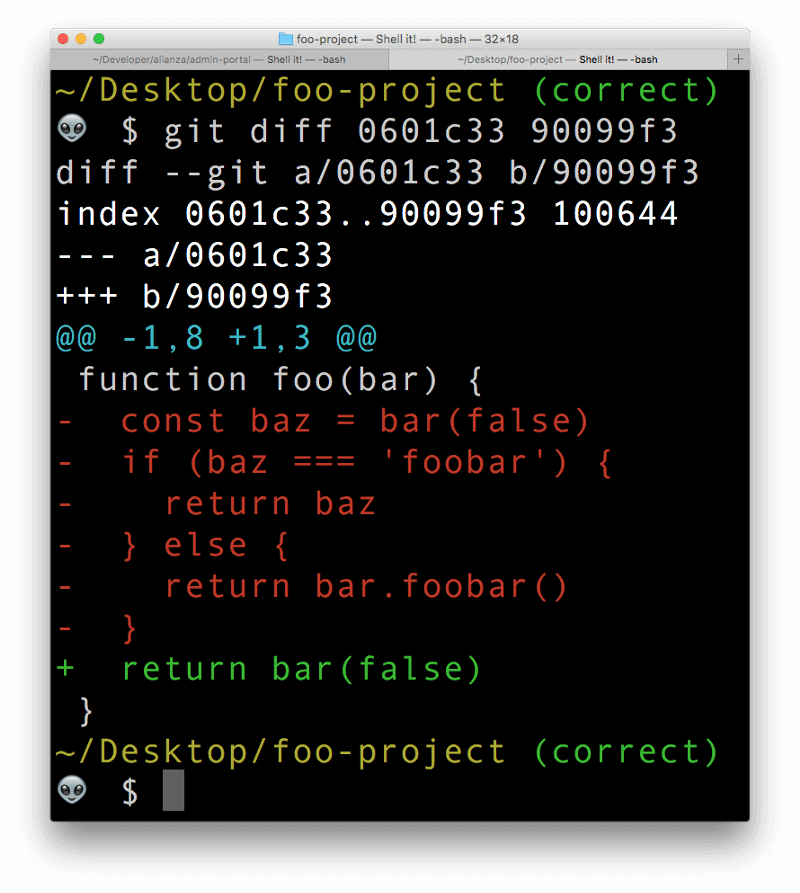 Some solid reasons you should delete code that is not used

I often find stuff like this in codebases I review:

You might be thinking: "But Kent! What if that 'good reason' is no longer true, and we need to do it the old way again later?" The answer, my dear reader, is git diff:

There's the precious code. We can grab those changes and boom! We're back in business!

Now you might be thinking: "Ok, cool, but what's the problem with leaving the commented code in there? It's easier for people to see how things used to be, it might be helpful to them, and it's a way for me to leave my mark on the codebase forever!!"

Here are a few of the reasons you should probably not commit commented out code:

For me, this is the biggest reason and reason enough to avoid doing it altogether. I don't know about you, but when I come to commented out code, I'll often stop what I'm doing to read it. I think "maybe it's important" or I may simply be curious. Either way, my workflow has been derailed.

It can be possible to skip over someImportantCode() when scanning over a file. This is less likely with the right syntax highlighting but it can happen, and the comments are simply not worth keeping around.

I've long held the opinion that the only thing that can tell you the truth about the code is the code. The instant you add a comment, it's out of date. Documentation comments are beneficial enough to justify their existence (though you should try to make your code self-documenting for people other than yourself).

However commented out code does not justify its existence. It wont take long before that commented code is out of context, no longer tested, linted, or run, the APIs it was using have changed or been removed, and now it's just in the way.

Again, the main problem is commented code adds confusion with no real benefit. Just rely on your version control system to keep track of the code that once was. Let it go.

If you’re an eslint person, you might be interested in Gleb Bahmutov’s eslint-rules (specifically his no-commented-out-code rule). If you’re not an eslint person, listen to Jamund Ferguson on JavaScript Jabber. His enthusiasm for it will convince you that you should try it out :-)

Q: Are there exceptions to this rule? A: Yes. But they’re rare.

Q: What about stuff I’m working on but isn’t yet working? I don’t want to wait until it’s all done because my computer might get stolen or catch fire! A: Put that in a branch. There’s no problem committing totally broken stuff to a branch. Once it’s done, you can merge the working stuff into master.Personally I recommend that you squash commits into atomically working commits before you put those into master, but as long as it’s working when it gets into master then you’re good.

Q: What about when we absolutely know the code is done, but some third party integration is required before it can be committed? I don’t want to lose that knowledge. Can’t I just say: “// uncomment this code when foo is done” ?? A: In my opinion, that TODO should live in a story and the commented out code should live in a development branch. What if the third party integration fails or is dropped? You now have to remember to remove the comment and the commented out code.

Q: What about examples for third party integrators? A: To me, that’s not commented out code, that’s documentation. I’m totally cool with that. Though, to be honest, it sort of drives me nutso that the documentation in the AngularJS 1 project is in the form of comments in the files. The first line of runnable code in compile.js is line 737! But that’s another blogpost (and I’m not saying they’re wrong to do that… There are tradeoffs for sure).

Q: git history isn’t very discoverable… How do I find the commit that removed the code I want back? A: A very valid question. Removing commented code not only makes it harder to find later, but it also makes it so people in the future don’t know it existed before. For finding the code, there are tools and git commands to help you look at the history of a file. I’ve had to do this before, going back months (even years) in a file was actually quite trivial. As for knowing of its existence, if it’s that important, you could add a comment that explains briefly that something important existed there before and people can find it in the git history. I believe this is an extremely rare case and can’t think of personally ever needing to do this.